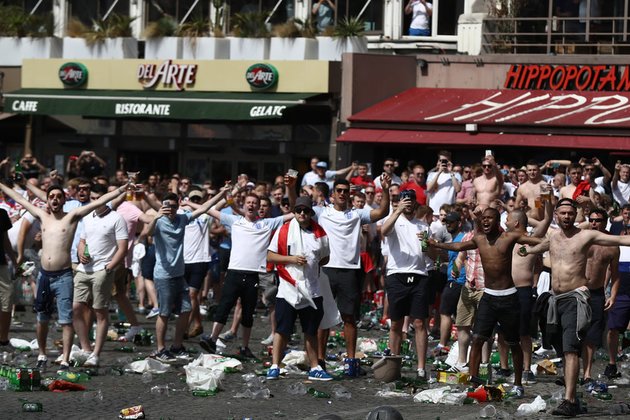 UK authorities will confiscate the passports of 880 football hooligans ahead of a match between England and Germany in Munich next month, according to reports.

The drastic development comes amid fears of violence, with those that have a history of football-related crimes set to be ordered to hand over their travel documents before the Nations League tie on June 7 as a means of guaranteeing that they cannot travel out to Germany.

With the fixture set to take place a day after the D-Day anniversary, there are valid fears the action could be disrupted by misbehavior given historical tensions between the supporters of both teams.

These are fueled not only by a shared World War past, but also classic matches in the 1966 and 1990 World Cups plus Euro '96.

The Daily Mail claims that no alcohol will be served in the stadium on matchday, and that 12 Wembley stewards will head to Munich along with six police spotters and anything up to four British intelligence officers to aid local security and authorities.

England's football governing body the FA have thus far sold 3,466 tickets for the match at Bayern Munich's Allianz Stadium, and fans will receive messages from it urging the need to behave themselves.

This is especially important considering that England have already been hit with a two-game stadium ban - with one of the matches suspended for 24 months - for the lamentable scenes that took place during the Euro 2020 final at Wembley.

After they have faced Germany, the Three Lions will take on Italy, who beat them in a penalty shootout at Euro 2020, in an empty Molineux stadium with England manager Gareth Southgate describing the ban as an "embarrassment" this week.

"We're on a yellow card, aren't we?" Southgate asked. "We've got the embarrassment now of playing behind closed doors at home."

"Normally when you watch those things having happened abroad we're all grandstanding about how it's someone else's problem and how this country should be dealt with - and now it's us. That's not a good optic for our country," he added.

"There's clearly a responsibility within football because, when it's in our environment, we've got to do all we can to try to make sure it doesn't happen," Southgate also remarked, in light of various pitch invasions in English football as of late that have even seen fans jailed for attacking players.

Southgate pointed out that the unrest comes as part of a "wider problem" that is a reflection on where England is as a country during difficult times.

"It's a difficult time for people. We're going to have more difficult times because of the economy and the realities of the situation we're in," Southgate accepted.

"But we have to look at what we're doing in terms of parenting. What are the expectations?

"How do we want to be viewed as a country because that's manifesting itself in football at the moment and that's not a good look.

"We don't want to go back to fences up and the type of environment that created," he concluded.