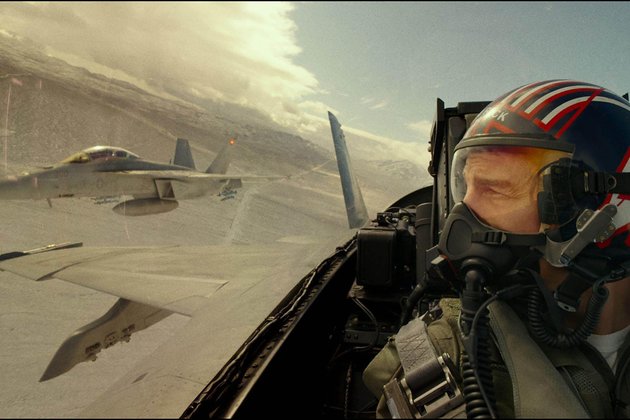 In the new Top Gun: Maverick film, pilots zig-zag fighter jets across the sky at stomach-churning speeds. Tom Cruise's character, Captain "Maverick" Pete Mitchell, is still shocking fellow pilots with his prowess and daredevil antics after 30 years in the job.

Maverick flies an F-18 figher jet in the film, an aircraft which can reach over 1,000 miles per hour. How do real pilots cope with huge forces involved in flying so fast?

I've had a taste of what happens to your body when flying a jet. I was sitting in a tiny cockpit with four times normal gravity pushing down on me when another violent manoeuvre shoved me deep into my seat. Muscles fatigued beyond function, my vision began to grey out and I realised I was losing control.

I don't remember what happened next but cockpit video footage shows me passing out and collapsing, held up only by my harness.

Thankfully, this wasn't while in control of a multi-million pound high performance fighter jet and trying to outwit my opponent in a high-speed duel. I was in a ground-based training faculty for military pilots as a research guinea pig. Think of a merry-go-round spinning around, but much, much faster, and then expand it out so it's the size of a bus, and you have a human centrifuge. I was strapped onto the outside of this, being tested as part of a study into the effect of high-gravitational loading (high G) on the human body. I failed this test in a way that would have crashed and killed everyone onboard if I had been flying a jet.

What is high G?

We are held to the surface of the Earth by gravity. This force can be quantified as one unit of gravity (1G). When you rapidly change direction (think about riding a roller coaster or cornering a car), you can feel centrifugal force (which acts on an object moving in circles) pushing you outwards. It adds to the force of gravity acting on you. I lost consciousness after about 15 seconds at 4G (or four times normal gravity pushing down on me) when this extra force overcame my blood pressure's ability to move blood from my heart up to my brain.

Formally known as gravitational-induced loss of consciousness, pilots refer to this as "Gloc", pronounced "gee-lock".

The retinal cells at the back of your eye are particularly sensitive to low blood pressure. That's why one of the first signs that Gloc is about to occur was loss of colour vision (greyout) before complete loss of vision (blackout). The next symptom was brain hypoxia - a complete loss of consciousness due to a lack of blood supply and therefore oxygen to the brain. Approximately 15-20% of Royal Air Force fighter pilots have experienced Gloc at least once in their career. As you wake up your muscles twitch uncontrollably and you are disoriented. Your neurons fire wildly while your brain tries to figure out what you just did and why.

Why pilots can withstand high G

High-performance pilots train on facilities like the centrifuge I was in and learn how close to the edge they can go, recognise the symptoms of greyout and blackout and when to back off. Pilots are also taught anti-gravity strain manoeuvres. These are a special set of contractions that squeezes the muscles of their abdominal core and thighs and physically push blood upwards towards their heart to keep the brain supplied with precious oxygen. Pilots wear anti-gravity flight suits, which automatically squeeze their legs when they do particularly violent manoeuvres, to help push blood towards the heart.

With training and practice, pilots can withstand more than twice the G force that made me pass out. This is physically exhausting training, comparable to working out to the maximum in a gym. But it can make all the difference during a high-stakes duel where turning your jet faster than your opponent is life or death. Military pilots are encouraged to keep fit as muscular strength helps with G tolerance.

Fighter jets are a long way from the relative comfort of crowded budget airlines. Rapidly changing gravitational loads on fighter pilots can result in severe back and neck pain due to constantly varying gravity, and delicate sections of pilots' lungs can even temporally collapse under high-gravity loads.

Pilots must also master the mental aspects of high-performance flying. Controlling your own jet is a relentless maths challenge which fighter pilots must get a grip on while trying to out-think opponents in a highspeed 3D game of chess.

What does that mean for the 57-year-old Maverick in his latest adventure? As we age, our bodies decline in all sorts of physical functions. This includes all the individual aspects of our cardiovascular system which works continuously to keep our brains well supplied with oxygen. While it'd be reasonable to assume that Maverick wouldn't be able to pull the same G's as his younger self, that might be incorrect.

There's not a huge amount of data on older high-performance pilots, but there are some hints that suggest being older could be slightly beneficial to G tolerance, possibly due to higher blood pressures and slightly stiffer arteries seen with age. Since G tolerance can be learned by experience, it could just be that older pilots are better adapted through years of training.

That said, increased strength and muscle mass also seems to help with G tolerance, and we tend to lose muscle mass and strength with age. Older athletes retain more muscle mass and force with ageing than untrained older individuals, so if Maverick's still playing plenty of volleyball on the beach and kept up his flying hours, he might just be able to outpace his younger self.