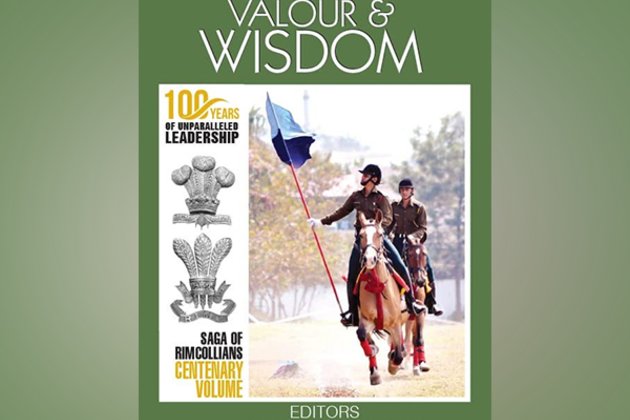 Valour and Wisdom, an insight into one of the oldest military education institutions in India set up by British

New Delhi [India], May 24 (ANI/NewsVoir): 'ValourWisdom' attempts to establish the praxis that RIMC has shaped the nation's military leadership. This has been done through a scheme of well-researched chapters accompanied by historic documents including pictures, from some of the better-known archives in India and abroad, and also freshly photographed frames as and where necessary.

The Doon valley and Mussoorie hills is home to several colonial-era public schools which groom young minds to take over the leadership role in different spheres of life. One of the oldest among them is the Rashtriya Indian Military College (RIMC). It was inaugurated on March 13, 1922, as the 'Prince of Wales' Royal Indian Military College', by Prince Edward VIII, the then Prince of Wales.

It was founded to fulfil the national demand for the Indianization of the officer cadre of the British Indian armed forces post World War I, where more than 70000 Indians sacrificed their lives in support of the Allied forces.

It was set up in the pattern of British public schools to groom Indian youth for entry into Royal Military College, Sandhurst, UK, prior to awarding them a Royal Commission into the officer cadre. This nursery of military leadership completed 100 years of existence on March 13 2022.

Whenever an educational institution reaches a milestone in its existence, it's the opportune time for it to reflect upon its contribution to society.

In the West, it is now an established practice to research and write the history of an institution during its jubilee celebrations. In India, the practice, however, has been to bring out self-congratulatory volumes in the genre of coffee table books.

The volume at hand has been helmed by credible editors, which includes veteran journalist and author Sidharth Mishra, who despite being alumni of the institution has approached the project objectively.

Commenting on the book on RIMC, one of the co-authors of the book Sidharth Mishra said, "RIMC has contributed to the nation-building immensely and the book is a rare attempt to highlight the academic institution's valuable contribution to India's defence forces as well as other spheres including business and economy."The book attempts to tell that RIMC is not just celebrating a century of existence in brick, mortar and greenery but it is celebrating the leadership its alumni have provided at various critical stages of the evolution of our Nation.

The Second World War, various wars and military expeditions of the post-independence era, the support provided to the civil population in combating natural calamities and combating terrorism in various sectors is replete with the instances of a Rimcollian, as an alumnus of RIMC is known, in the leadership role.

In fact, it was the Rimcollians who were in higher echelons of the military at the time of independence, who built and guided the Indian Armed Forces into a formidable foe to reckon with.

As time progressed, Rimcollians also diversified into sectors and streams other than military, excelling once again in the new uncharted areas.

The spirit of valour and wisdom infused into the young minds of the cadets at this august institution has enabled them to rise to the highest echelons of their chosen career, be it in the armed forces or otherwise.

A book like this would probably need a sequel to tell many of the stories in detail which find mentioned only in brief in this otherwise voluminous title.

AIR Marshall PP Reddy was at RIMC between 1967-72. He was commissioned into the Indian Air Force in 1976 as a fighter pilot. After serving in uniform for almost 40 years, he retired in 2016 as CISC (Chief of Integrated Defence Staff to The Chairman Chiefs of Staff Committee), the most important tri-service assignment before the emergence of the Chief of Defence Staff.

Post-retirement, he was picked by then Defence Minister Manohar Parrikar as a Consultant for Defence reforms. A former President of the Rimcollian Old Boys Association, he is presently the Chairman of its editorial committee.

Sidharth Mishra, a veteran media person and academician of repute, was at RIMC between 1979-83. On leaving school, he joined Delhi University and followed it up with a very fruitful career in mass communication rising to become a newspaper editor.

An author of standing, he has nearly 20 books and over a thousand articles and research papers to his credit including publications from the prestigious Oxford University Press and the National Book Trust of India. On changing course to academics, he has led and taught at some very prestigious institutions in the country.

This story is provided by NewsVoir. ANI will not be responsible in any way for the content of this article. (ANI/NewsVoir)